5 Things to Know About Sinkholes 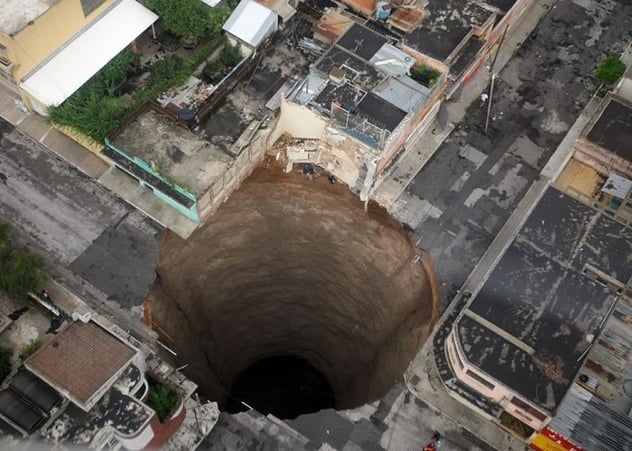 As an engineering firm, we here at Shield know a lot about sinkholes. This phenomenon is more common in some areas than others, and in many cases, seems to happen without warning. Sinkholes aren’t just unsightly; they can be dangerous to roads, structures, and even people.

Here are five very important things to know about sinkholes:

Did you know there are actually distinct types of sinkholes? There are natural sinkholes that form due to the dissolving of limestone and dolomite bedrock by groundwater. These sinkholes can be accelerated or aggravated by changes in rainfall, leaky pipes, and poor surface-water management. Other pseudo- sinkholes are caused by manmade activities like drilling, mining, construction, poorly-maintained utilities, ruptured utilities and improperly compacted soil.

2. There are three general distinct types of sinkholes.

The three general types of sinkholes are Solution, Cover Collapse, and Cover Subsidence. Solution sinkholes are caused by continual water erosion that degrades the limestone and dolomite bedrock below, otherwise known as karst. Cover Collapse sinkholes are usually large and sudden, caused when the supporting bedrock and soil below erodes away and the surface strata can no longer support its own weight.  Cover Subsidence is slow-growing, occurring when clay, sand, and other particulate bedrock coverings settle into the cracks and holes in the rock itself and, therefore, causing a visually noticeable surface depression where water may pond after a rain event.

3. Sinkholes are common in certain states.

Florida, by far and away, has the most naturally-occurring and manmade sinkholes of any state. Other states in which the soil and bedrock conditions are favorable for inducing sinkholes include Missouri, Kentucky, Tennessee, Pennsylvania, Alabama, and Texas. Sinkholes are not a US-specific problem though, and occur all over the globe.

4. Sinkhole dropouts can be preventable.

Once detected, it may be possible to stop the resulting dropout forming. There are dozens of signs that can indicate a sinkhole-in-the-making including settlement of soils in a semi or circular pattern, leaning walls and posts, doors that won’t close, and pooling rain. Cities often hire a design team of civil, geotechnical, and structural engineers to detect and remedy sinkholes to prevent the loss of life as well as structural damage. If caught early, potential sinkholes can actually be injected with grout to rebuild a foundation over the degrading bedrock.  However, there are many ways to mitigate a sinkhole dropout depending on the affect the dropout has on a site or structure. The design team of civil, geotechnical and structural engineers will tailor the correct dropout mitigation recommendations on a case-by-case scenario, as each dropout will have its own obstacles that will need to be overcome.

5. Many people are involved in sinkhole remediation.

In instances where a sinkhole needs to be prevented or where a structure needs to be built in a sinkhole-prone area, it’s typically all hands on deck. Geotechnical engineers and geologist are the first line of defense, performing subsurface testing. A design team of geotechnical, civil, and structural engineers develop a remediation plan for existing building and future building specifications.

More questions about sinkholes? They’re an issue we deal with often at Shield Engineering. Contact our experienced team today to find out whether sinkholes threaten your build and how to work around them.